Becoming windy with a strong change: May 7-11

Event discussion and analysis for Victoria and Tasmania, including day to day weather.

Decent change showing up in the progs with a front approaching on Friday with winds freshening and some showers developing, moving through on Saturday with a band of rain or showers followed by a cold showery 24 hours. The system is quite cold, with 850Ts dipping to around -3C on Saturday evening into Sunday so should see some coldies, the odd thundery and some small hail. Bit of snow in the alps, that could drop close to the top of spots like Macedon.

There isn’t a lot of moisture feeding into the system and it tends to peak to our west so won’t be a big rain producer. That said, the upper trough is sharp, so there is a chance the system could slow down and wave.

Before then, a couple of mild sunny to partly cloudy days.
Top

A horrible couple of days of windy filth coming up.

It's going to make it rather unpleasant on the bike riding home.
Caroline Springs, Melbourne's meteorological boredom zone.
Top

Already quite windy here (my least-favourite weather phenomena) and now a SWW for damaging winds issued for a fair chunk of southern and NE Vic.

Temperatures were mild but wind and cloud made today pretty unpleasant here. Tomorrow and Friday look pretty similar. Not much change for the weekend. Nice cold front with decent shot of cold air, but not a lot of moisture being tapped. Looks like 5-20mm for most, better in the usual wet spots.
Top

Big gusts here this morning. Quite unpleasant. Gonna be some tree branches down or worse with this blow coming after a lot of rain. Next two fronts will fade as they approach, with the main event on Saturday. Progs are tending to up rain totals so a handy fall for most... not big but perhaps 5-20mm for most southern areas.
Top

The disgusting filth has arrived nice & early this morning.

Filthy winds yes - but sunny weather arrived here about an hour ago.

Nowhere near as windy as i thought it'd be today. It was a lot worse yesterday
https://www.weatherlink.com/bulletin/53 ... 76dd68e8bc: for current weather updated every 2 minutes
Top

Almost warm here today with 17C. Would have been a nice day if not for the nasty wind

Front for Saturday still looks good. Showers look like lasting into Sunday. Gonna be another decent blow on the coast with a storm surge (which is lower than last week) but on a higher tide. Beaches will be a mess.
Top

Was pleased with a windy day and not a windy night,
Well unless I slept through it..
over night temps are very pleasant..
http://australis.redbubble.com/
Top

Almost warm day across Vic. Last one for a while. 14C in FC with glorious sunshine. Garden looks a treat with the grass still growing, and leaves turning.

Front looks decent, moving up on the southwest atm.
Top

Radar is looking chunky with with ok falls already clocked up out west, stretching into the Wimmera. Looks like starting in Melbourne around 7 to 8am. Nice cold pool tucked in behind the front so coldies followed by a cold night. Snow falls down to a bit below 1000m. Currently down at Walkerville where I hope to cut a somewhat out of control lawn before it rains

System didn’t quite link up with Indian Ocean moisture from the develop TC so won’t be big falls, but should keep the month ticking over. Couple more sneaky front to come before it all clears out middle of next week.

On the coast another round of big waves and a moderate storm surge sitting on some of the highest tides of the year. Could see some minor flooding again around the Bayside mid arvo, though not quite as high as last weekend.

EDIT> a photo of the incoming storms at Walkerville. This is looking northwest with Inverloch and Tarwin hiding in the rain. 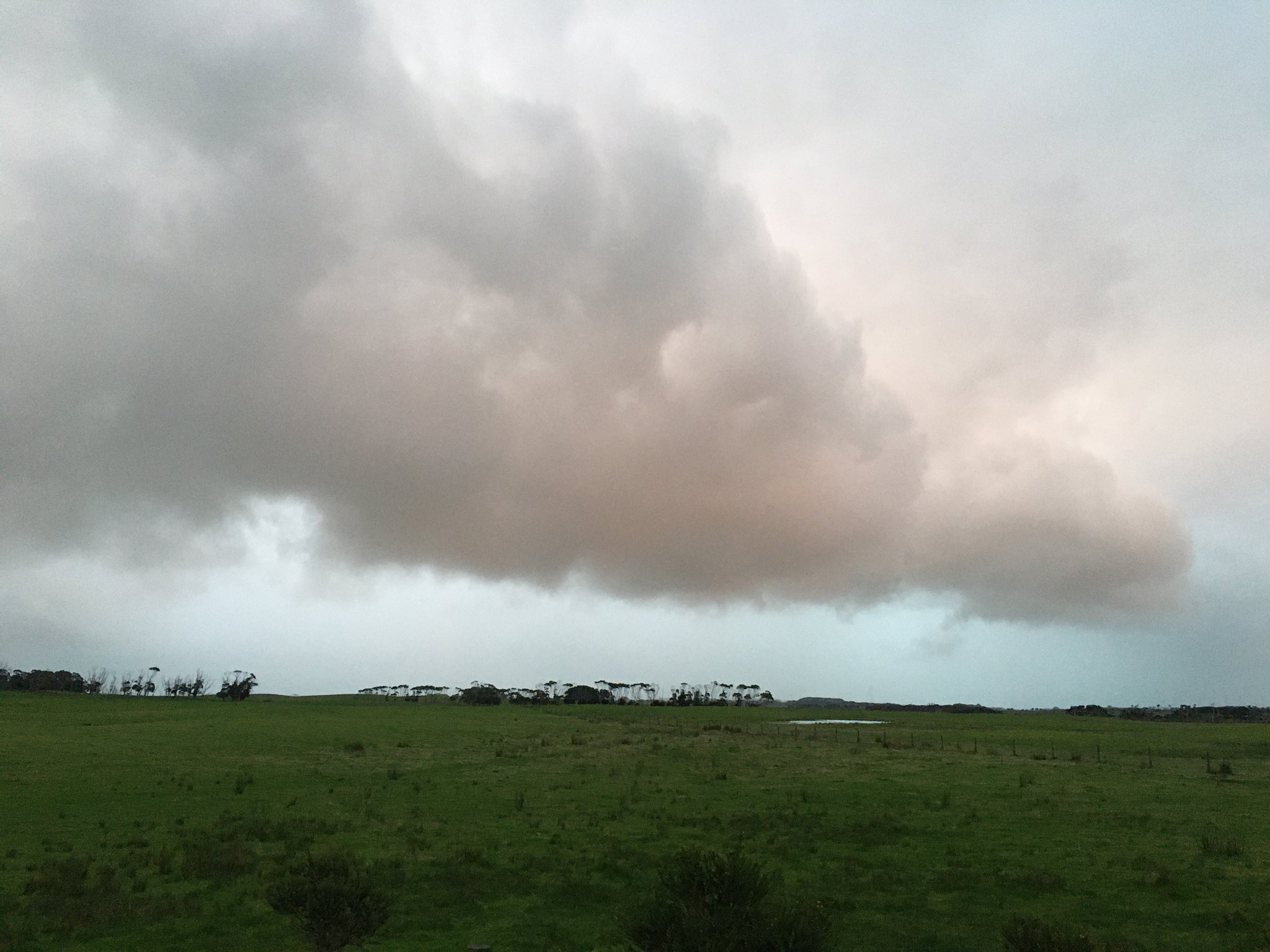 Slightly disappointed with our 7mm to 9am from the main band, but more impressed with the punch of the apparently 'little' showers following. The radar is almost operating in reverse this morning!
Top

Gordon wrote: ↑
Sat May 09, 2020 10:43 am
Slightly disappointed with our 7mm to 9am from the main band, but more impressed with the punch of the apparently 'little' showers following. The radar is almost operating in reverse this morning!

A massive 1.8mm since my last post! Temp has dropped 3 degrees to be on 8C.
Wallan PWS: https://www.wunderground.com/personal-w ... N9#history
Top

Front blasted through here about 11:30. 7mm in last hour. Temp 9. Wont take a lot more to get the gushers flowing again.
Some still flowing from last week's rain despite nothing since. Shows just how wet the ground is.
Top

7.2mm from the main band here and a further 2mm since. Had a decent hail shower earlier this afternoon. The sun has come out and the temp has spiked to 10c but most of the day it has hovered around 8c.
Top

Just on 12mm in FC and 15mm in Walkerville. Cold, wet and wintery

Down here on the coast had multiple fast moving coldies with brief hail.

Gales and a big storm surge. Here’s some photos from Tarwin Lower near Venus Bay where the tide is the highest I’ve ever seen it (today is one of the highest tide of year and there was a storm surge of about 40cm). Inverloch Beach is a huge mess. Barely a beach there today with massive erosion

The tide was still coming in when I took these photos, so probably got a touch higher. 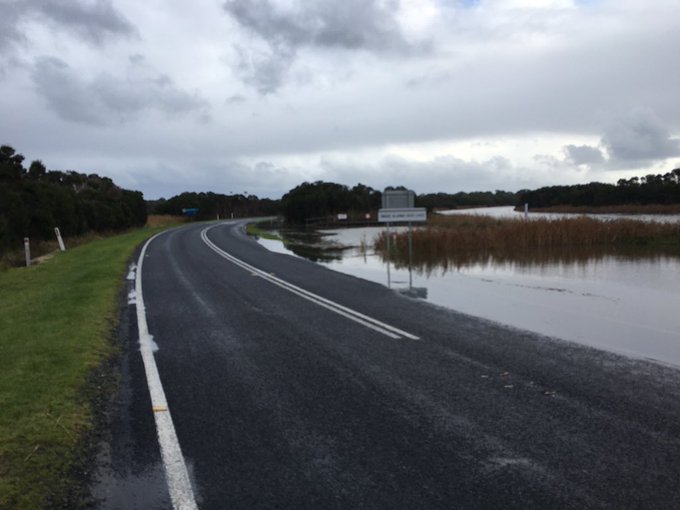 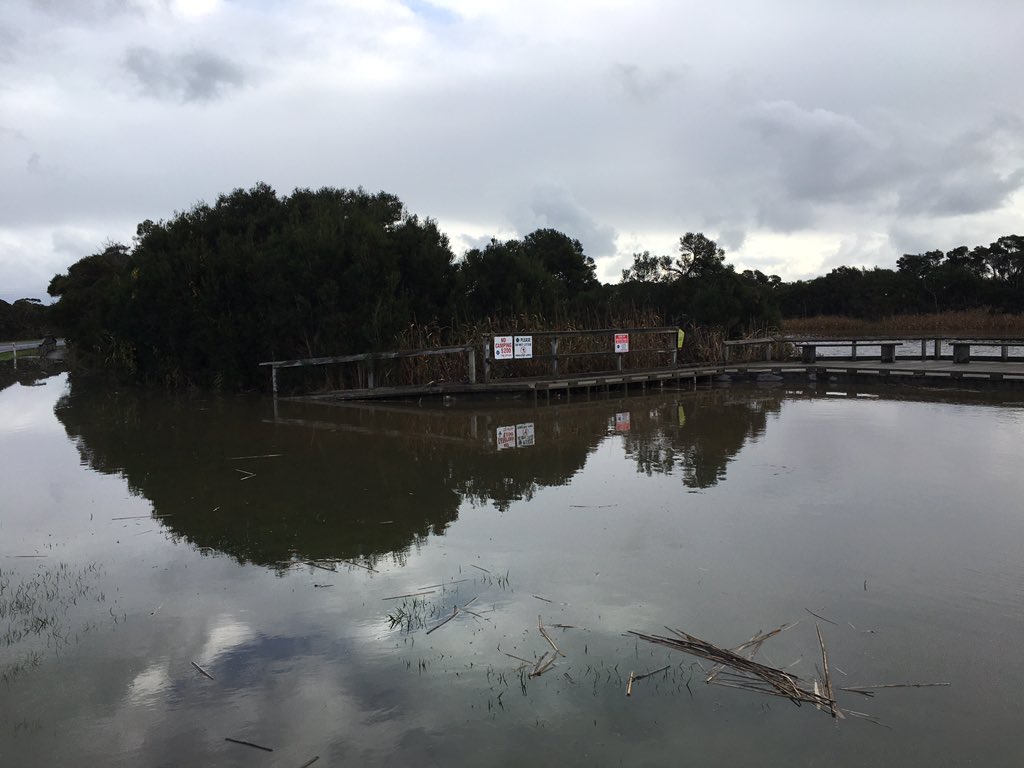 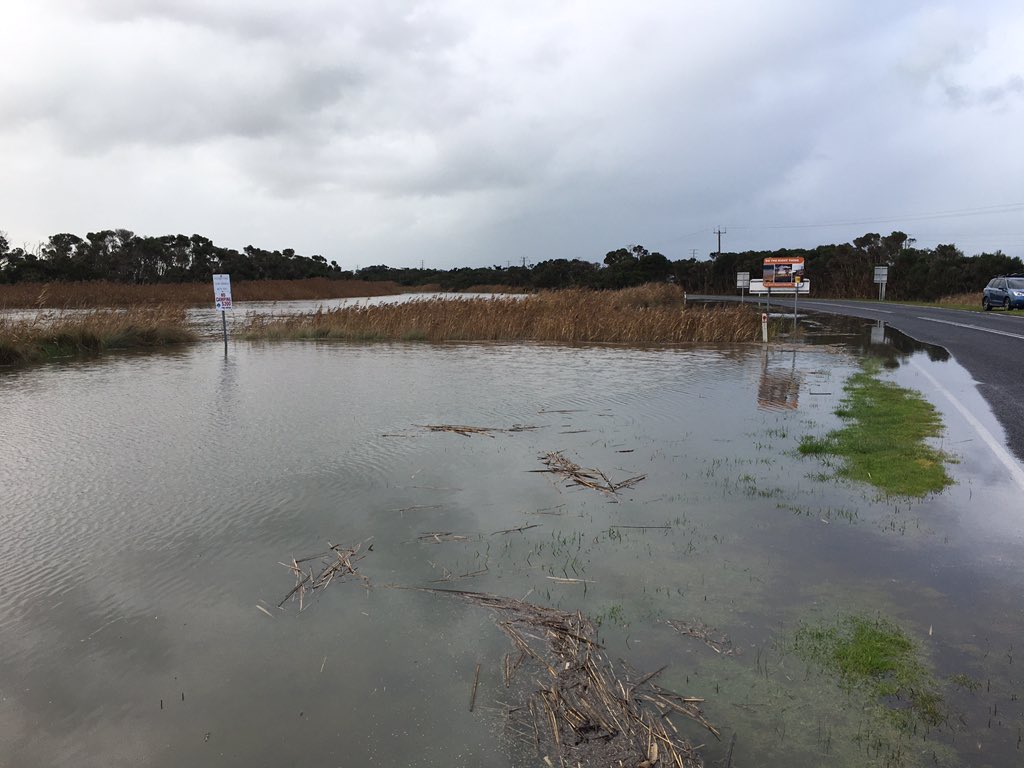